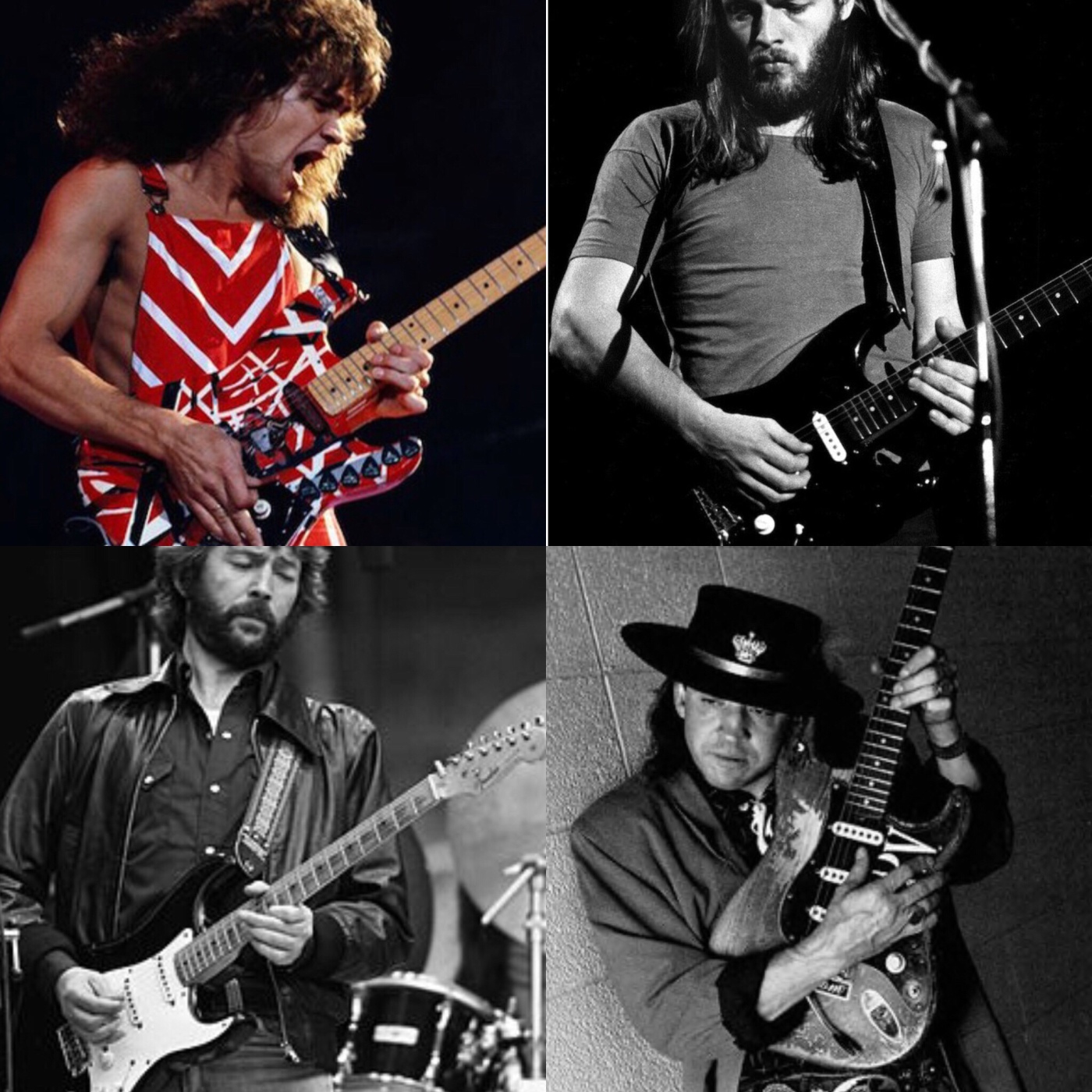 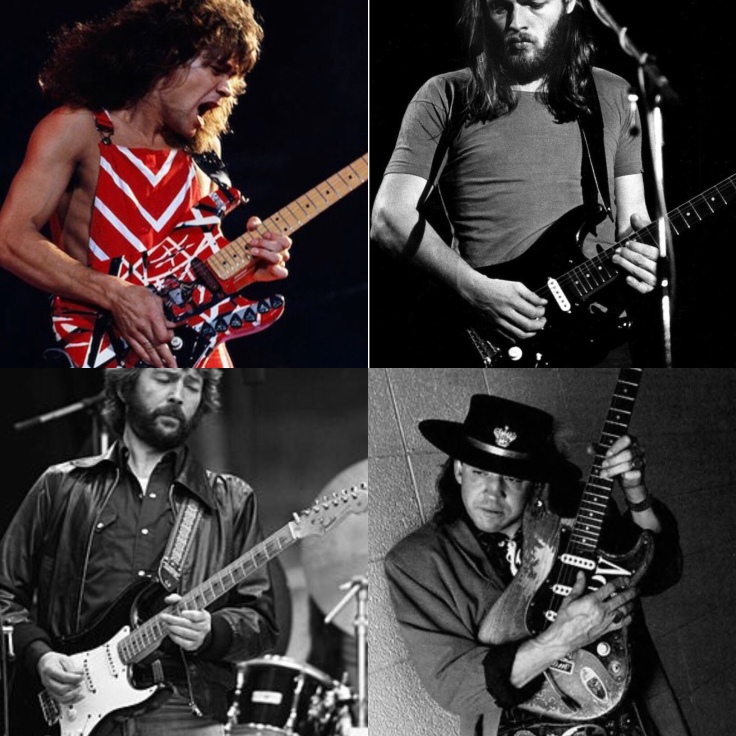 Eddie Van Halen, Eric Clapton, David Gilmour, Stevie Ray Vaughn.  I’m not just name dropping, they’re all guitarists that have something in common: their most iconic guitars were partscasters.   They did all this in the days before Warmoth, eBay, and Reverb.com.  When you would have to cannibalize guitars to get a neck you want with a body you want to create ultimate toneage with playability.   The results these greats achieved with these mutts of guitars speaks for itself.

For purposes of this blog, I think it’s apropos to differentiate between creating a partscaster and hot-rodding a guitar.  Creating a partscaster to me is just the marriage of a body and neck that did not come from the factory configured as such.  This can be done by either taking the neck off an existing guitar and putting it on a body you love, or sourcing different different parts that may have never been on a guitar previously.   Hot-rodding, on the other hand, is just upgrading parts on a guitar where the neck and body remain the same.

I’ve done my fair share of both partscaster builds and hot-rodding, and usually a combination of the two (hot-rodding a guitar after its been partscasted).  Like most things in my life, this approach to 6-stringdom is purely from a utilitarian perspective.  I don’t care about the features or cosmetic condition of my car as longs as it gets me from point A to point B consistently and economically.  I don’t care about how trendy my clothes are as long they’re comfortable.   I don’t care who turns their nose up at my Frankenstein guitar creations as long as the neck is comfortable and it sounds good.

What started me down this rabbit hole of partscaster bliss was my love for old USA made Peavey Predators.  They were consistently made necks and bodies (thanks to Peavey being an early adopter of CNC machinery) with cheap-o hardware.  It was the neck I spent most of my youth learning on and it was a good as it got to me.  I hot-rodded the bejeezus out of my first old Predator.  Then along comes eBay.  I discovered that you could buy used old Predator necks dirt cheap about 6 years ago, usually for around $50-$70 a pop with shipping.  Sadly, they’ve been consistently going up in price as my secret has gotten out.  Granted, it’s always a game of Russian Roulette as to whether an old neck like this is warped or has worn out frets.  Out of the 8 or so Peavey necks I’ve purchased at this point, there has only been one that arrived unplayable.

My first partscaster build was the marriage of a cheap-o Peavey Predator neck with a random telecaster body I received in a trade (I traded an old Teisco cab I received for free when my friend’s dad was going to throw it away).  No idea what brand or type of wood the tele body is, but it was solidly built.  After I took possession of the body, I knew there was only one neck I wanted, so to eBay I went.  Snagged the Peavey Predator neck sans tuners for $60.

This is where I learned that partscaster building is an exercise in problem solving that would make MacGyver proud.  Peavey Predators have deeper neck pockets, and therefore deeper heels on the base of the neck.  When I first tried to fit the neck to the body, the deeper neck heel would have required the strings to be about 1.5 inches above the body!  There were no saddles I could find that could even be raised that high.  So I spent about 45 minutes with a sanding block to shave the heel of the neck down to an appropriate thickness.  The next problem was the holes for the control-plate were stripped.  I initially just duct-taped it down so I could get to rockin’.  After a while I finally whipped out some toothpicks and shoved them down into the stripped holes.  Voila!  The screws stayed in place!

With the two major components in place, I set about sourcing the remaining parts to make this Frankentele breathe and live.  I decided I wanted a humbucker in the bridge, single coil in the neck.  I settled on a Seymour Duncan Lil 59’ bridge humbucker (used for $35) and Fender Noiseless Telecaster neck single coil (used for $30).  I sourced the cheapest black bridge I could find for $15, which I later replaced the horrendous saddles with roller saddles from guitarfetish.com for and additional $15.  I started with a loaded control plate that came with 250k pots for $20.  I discovered that the 250k pots made the humbucker sound too dark.  I replaced the 250k pots with 500k pots with an orange drop cap for $30.  The black Planet Wave tuners I managed to get for free from a friend who decided to deck one of his guitars out with gold hardware.

For a summary of the price of building an absolute workhorse of an amazing playing guitar:

Building this first partscaster initiated an obsession with trying to build the best guitars I could at the cheapest price possible.  I now spend hours perusing eBay, Guitar Fetish, Stewart Macdonald, Reverb.com, and Stratosphere trying to plot out my next partscaster build.  To me, the discovery of being able to purchase more Peavey Predator necks has led to me attaching them to all sorts of bodies made out of different woods with different pickups.  What this allows is for me to have almost any tone at my disposal but with a neck that is consistent from guitar to guitar.

Here I am playing this partscaster, which I named Shadynasty (any Always Sunny fans?….) with my band Don’t Call Me Shirley:

Here is my full family of Peavey-necked Partscasters and Predators that I’ve built/hot-rodded thus far.  I know my wife wishes I wouldn’t build anymore, but who know how many more I can add to the stable… 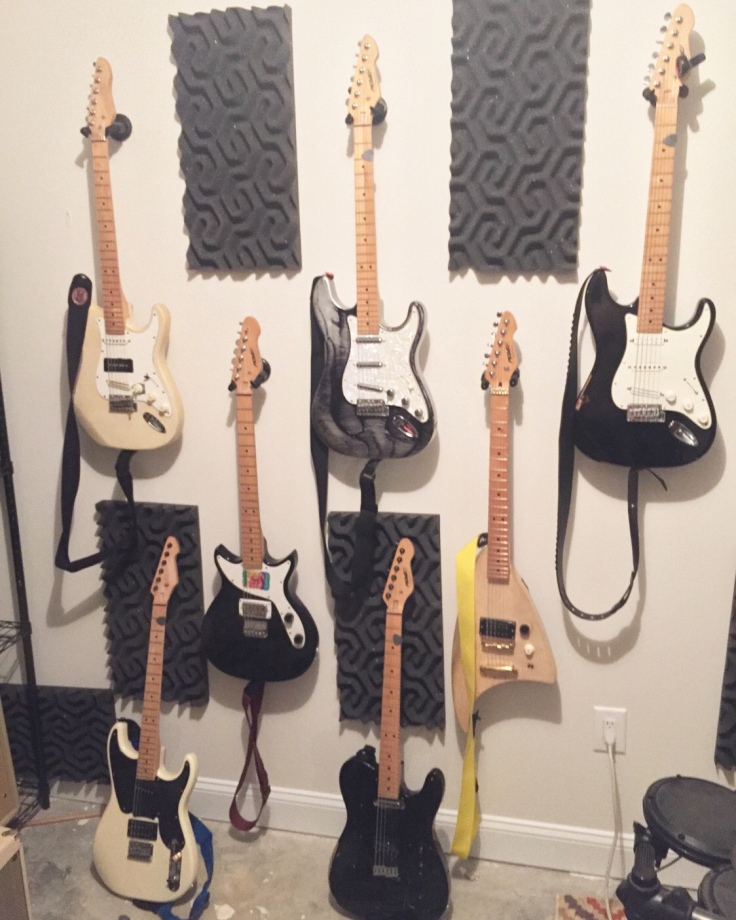 To tie this all together, will I ever make the impact with my cheap-o partscasters that the legends aforementioned in the opening paragraph made?  Probably not.  Will that stop me from constantly making partscasters?  Probably not.  Do I still enjoy the hell out of assembling partscaster?  Most definitely yes.  In future posts, I’ll highlight the different partscasters I’ve assembled and the stories behind them, and more importantly, how cheaply I managed to assemble them.