So you spend months or years dialing in your tone alone at home to what you think is just right before you get out gigging regularly.  You’re convinced you need that 100-watt stack to have those tubes cooking like your heroes of yesteryear did in stadiums.  After all, you spent summers mowing lawns and begging your parents to get that Marshall or Mesa.  You turn band practice into a pissing match to be the loudest much to the chagrin of your friend’s mom and your eardrums.

Fast forward a few years and you finally get those first gigs booked at the local spots.  You wheel your behemoth rig in, the mids scooped just right, that’s what made it sound so good at home.  Heartbreak for a musician starts at the first declaration of “turn down! you’re too loud!” from either the sound man or venue owner.  Begrudgingly you roll that master volume back little by little until they seem satisfied.  Suddenly, that fire breathing sound you dialed in loses it’s “oomph” and just get lost in the mix.  As an anti-authoritarian youngster you just think “if it’s too loud, you’re too old!”  However, that sound guy will usually (hopefully) have something that you don’t have: experience.  Heed their advice. 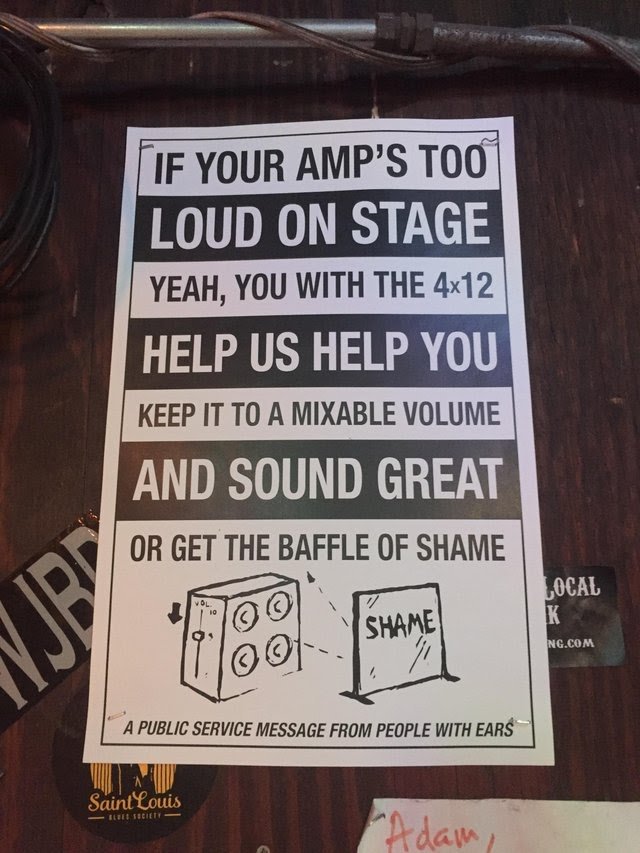 If you want to do anything more than noodle by yourself at home, you need to know how to make your tone sit as part of the overall band sound.  In the end a better overall band sound will lead to a better time for the audience, and when the audience is having a more enjoyable experience, the fun is greater for everyone.  After all, the tone you think you’ve been hearing from your heroes all those years isn’t usually just their guitar all to its lonesome; it’s mixed with drums, bass, keyboards, vocals, and whatever else they have in the band.  Every instrument has its sonic space and role.  This brings me to the thesis I presented in the title: every musician should run sound at least once.  Experience is how you learn to sit in a mix and the best way to get that experience is creating the mix yourself.

“A place for everything, everything in its place.” – Benjamin Franklin

I’ll preface this with I’m not a professional audio engineer, these are just lessons I’ve learned from years of bar gigs with a DIY ethic of running my own sound with often subpar PA equipment.  Also, just being too cheap to pay a sound guy since the ones that are local cost more than the band makes.

There are general, I wouldn’t say rules, but guidelines for the mix of most rock/popular music.  The goal is to give each instrument its own sonic space so each can be heard clearly.  Just as you would build a great house, I find it’s best to start with a foundation:  the rhythm section.  For the typical bar gig I play, I usually only mic the kick drum to give it some “oomph” in the room, the rest of the kit tends to project enough and/or bleed into the vocal mics.  Then I’ll add in the bass guitar enough so that the low end is solid without being muddy or boomy.  Maybe add a little high end sizzle to the bass so there’s definition to what they’re playing, especially if they’re slap-happy.

Now for the instrument I’m assuming most people reading this blog are here for: GUITARS! Guitarists left to their own devices will generally trapse all over their own frequencies AND the frequencies the human voice occupies in the mid to upper-mid frequencies.  But guitars really sit in a mix at the mid to lower-mid frequencies.  Setting up your tone to sit in this pocket is a crucial start to a successful mix.  Tubescreamer type circuits really focus on these frequencies, there’s a reason why that type of boost has adorned many a pedalboard over the years.  If you have too little mids in your tone, then no amount of volume will let the audience really hear what you’re playing.  You’ll just create muddyness and conflict with the bass and the vocals.  The first thing I do with the guitar channels is activate a low-cut if the mixer has one or just turn the low knob down 2 or 3 dB if that’s all the mixer has.  This way you’re not stepping on the bassist’s or kick drum’s toes.  Then I listen with my ears, if the guitar isn’t cutting through, I’ll add a little bump to the mids.  Then season the treble to taste as needed.  No amount of boost at the mixer will polish a turd if the basic frequencies of the rig aren’t there.  I believe the phrase I once heard was “one cut is worth a thousand boosts.”

Once the instruments are at a happy balance, the kick drum and bassist are thumping, and the guitar is sitting in that happy middle ground, then it’s time to add the ego ,whoops, I mean singer.  On the vocal channels, I also immediately activate the low-cut, or cut the lows 2 or 3 dB to avoid any low end rumble that could be picked up by the vocal mic.  Generally, I’ll leave the mid-EQ flat, then adjust the high end as needed.  For the most part I don’t do much EQ to the vocals just so they can come through sounding as natural as possible.  Unless you’re Yngwie Malmsteen, the vocals are going to be focal point for 95% of the audience, so it’s what needs to be the clearest with the fewest amount of frequencies interfering with it.

The Other Major Component: Stage Volume

Yes, a wall of fire-breathing stacks looks and sounds impressive.  Those amps were created as rock n’ roll became a huge, stadium packing phenomenon and the sound systems just weren’t as efficient and powerful as they are now.  These days there are very few gigs where I don’t have the guitars Mic’d through the PA.  To me, 20-30watts (tube) amps have more than enough volume to fill the stage in most bars/clubs.  The wattage really has to do with how clean you want your tone at gig levels.  I personally don’t like a sparkly clean tone, so 5 watt tube amps cranked to within an inch of their life really hits the sweet spot.  I can hear it without it being pumped into a monitor, it has that cranked tone we all love, and it lends to a clearer mix in the front of house since it’s not bleeding all over the vocal and drum mics.  From there the PA system will carry the sound to the audience and a balance can struck between guitarists.  The lower stage volume serves two purposes: it creates a more balanced sound and it lessens bleed into other mics.  Mic bleed just leads to a cluttered mess, yes, it will still happen, but minimizing it is the key.  Each instrument getting as isolated of a signal to the PA is crucial to clarity.

Back to my Thesis

In order to sculpt the best tone for your band, you really need to get out front to where the audience is to hear how a tone fits in the mix as a whole.  If you have the space, I recommend running a full dress rehearsal at band practice where you’re all facing the same direction and going through a PA similar to a gig, not in a circle all pointed at each other like a normal practice.  With either a wireless system or a long cable, get out in front of the PA, or have a friend play your rig and really listen to it in the mix.  9 times out of 10, if you’re getting lost in the mix, turn your mid control on the amp up a couple notches and you’ll start poking through.  If you have a Fender style amp with only Bass and Treble controls but no Mid control, just turn the treble and bass down and that will de-facto boost the mids.  A tube screamer style pedal will really push the appropriate frequencies as well.  Experiment here, turn knobs until you hear your tone clearly with the bassist, drummer and singer.  What sounds great at home in your bedroom won’t always sound great in a band context.

Another fun experiment is to try to create a mix with a loud amp, then create a mix with a quiet amp to hear just how much of a difference it makes.  The end goal is to have a balanced sound everywhere in the room.  When a band has really loud amps on stage, the mix you hear is based on where you are in the room.  For example, when I saw a legendary Thrash Metal band a few years ago at a huge festival, I was on stage left with a wall of Marshalls in my face.  From what I’ve read of this band, they don’t do the dummy cabs, these cabs were all hooked up and cookin’.  They have 2 guitarists.  I could not hear a single note from the other guitarist on stage right.  Maybe it was balanced back where the sound booth was, but not to us up front on stage left.  To have both guitarists audible to those of us up close with the immense volume each guitarist was blasting, it would have taken the PA to hearing damage territory.

Contrast that to creating a mix with low stage volume.  This approach allows the sound engineer, aka YOU, to have all instruments balanced on both sides of the stage.  The high-end on a guitar amp is very directional, whereas the horns on a PA system very widely disperse the high-end.  When an amp is cranked it will be loud throughout the room, but only the low frequencies, therefore it won’t have the definition.  The way a PA disperses the sound will allow the guitar to be heard clearly throughout the room.  If you want the audience to hear the intricacies of the technique you’ve spent years perfecting, the PA is the best vehicle for everyone who isn’t directly in front of your amp.

In conclusion, the best way to achieve a cohesive band sound, which is optimal for all parties involved, is to get out front and sculpt the sound as a whole.  Leave the ego at the door and be a team player.  What you may think sounds best to you standing in front of your amp may not sound best in the context of a band from the audience’s perspective.  The best way to gain this experience is to take at least a few turns behind a mixing board and putting the pieces of the puzzle together yourself.  This blog is not meant to disparage or take work from the sound engineering professionals, they’re a critical part of every gig, especially at the professional level.  This blog post is meant to make guitarists more aware of what it takes to make their rig and tone an appropriate fit for a gig.

One thought on “Every Musician Should Run Sound At Least Once”