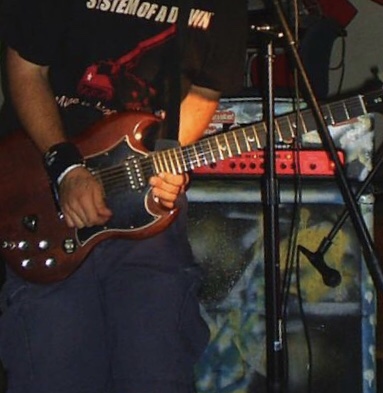 The quest for tone is neverending.  I’ve had my fair share of rigs over the years, some great, some crap, but they have all been part of the journey.  Sometimes I’ll show up to a gig with an amp just to see if I can get away with it.  Whether it’s just the “dirt cheap” factor or really small, I get a kick out of guitarists looking confused when they realize where my sound is coming from.  Here is a small sample of some of the ones I’ve had.  I’ve only recently started documenting them regularly, I’ve had a lot more from the days before every had a phone with a camera and I cared to share them to social media.

This was my first gigging rig that I bought with my own money after high school.  Don’t laugh.  It’s a Line 6 Flextone II, essentially a POD with a 200watt stereo power amp attached to it.  My rationale was that I didn’t know if I wanted a Mesa, Marshall, Vox, etc., at the time, so I bought an amp that had all of them.   After spending years with this amp I finally figured out the best way to dial it in (turn the cab sim OFF if you’re playing through a cab…). The cabinet was the highlight of this rig though.  I took an old Ibanez 4×12 cab that just had horrible speakers in it and put two Eminence Texas Heats in it while leaving the other two speaker holes empty.  Then one day at band practice, we were bored, there was spray paint cans there, so that resulted in the colorful eyesore you see in the picture.  When that band broke up I wound up selling the Texas Heats and sent the cab to the dump, but I kept the head and used it for a long time with a funky old Teisco 2×15 cab a friend gave me.  I eventually sold the head, but Line 6 remained a part of my rig for quite a while.

This Fender Super Champ XD is what started my obsession with trying to gig with as small of an amp as I could get away with.  I picked it up as a Black Friday deal at Guitar Center for $170 when it first came out.  This amp was “meh” until I upgraded the speaker to an Eminence Ragin’ Cajun, then it came to life.  With a 15-watt tube power amp and an efficient speaker, it could really hold it’s own volume-wise.  At this time I had a Line 6 HD500 floorboard, which I would send direct to the PA and use an amp purely as an onstage monitor.  This amp was a great, it’s definitely one I regret parting with, but that’s just how it goes with the quest for tone! (I’ll do a future blog on gear I regret selling). 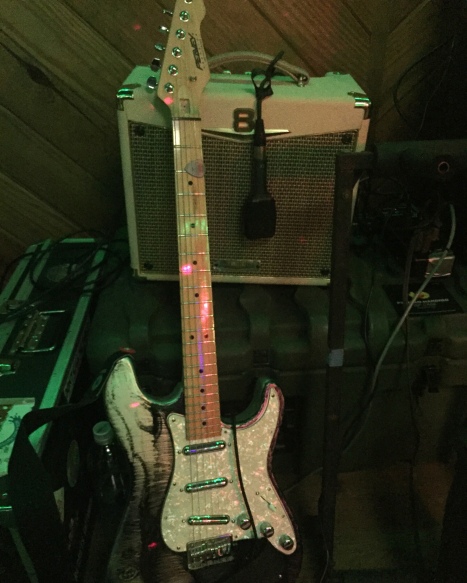 This Crate Palomino V8 was actually my first “tube” amp that I got after I had been playing for almost 18 years.  It took me a while to attempt a gig with it.  I had been a cheap-ass solid state guy up until this amp, and this amp allowed me to turn into a cheap-ass tube guy.  At 5 watts, one EL84, one 12AX7, and one 10″ speaker, it’s a nasty little thing.  I wound up transplanting the Rajin’ Cajun from the Super Champ XD above into the V8.  The secret weapon of this amp is it actually has an effects loop.  With the aforementioned Line 6 HD500, I played quite a few gigs with the HD500 acting as the preamp and plugged into the power amp of the V8.  This allowed me to get flexibility with the sound of a tube power amp holding on for dear life.  I eventually ditched the HD500 (well, part of a big trade for a Mesa Maverick amp…) and went for an analog pedalboard.  The V8 has horrendous built-in distortion, BUT, it actually takes pedals very well.  I’ve played a few gigs with it and a traditional pedal board with very good results. 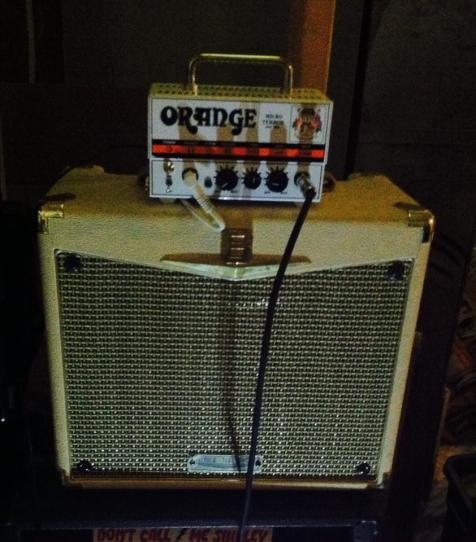 The Orange Micro Terror is a mighty beast of a tiny amp.  I bought it when it first came out and just had to put it through its paces at a gig.  I didn’t have a small cab at the time, so I just plugged it into the Eminence Ragin’ Cajun in the Palomino V8 discussed above.  It totally blew me away and took pedals very well with the gain turned down.  I wound up selling it to buy the Micro Dark Terror when that amp came out since it has an effects loop built in.  But the Micro Terror amps are totally giggable when matched with a good speaker, not that little 1×8 cab it comes paired with.

Yes, I’ve also gigged with the little Vox AC-4 head.  (the Marshall Haze under it was the “backup” amp).  It sounded ok, the reason I didn’t hold on to it for long was because the only 16 ohm cab I have has an Eminence Cannabis Rex in it and the AC-4 just did not mesh with that speaker.  But, it was a fun experiment. 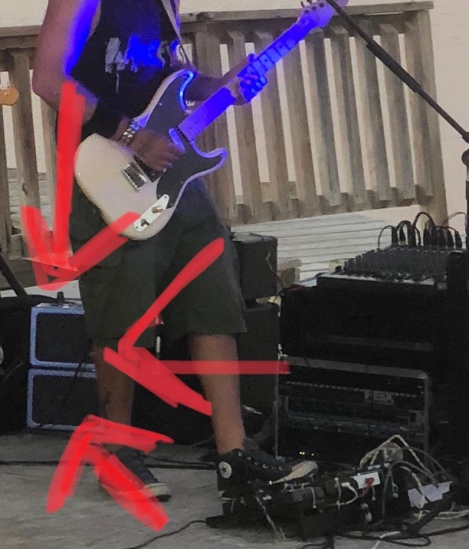 The ZT Lunchbox is what I would consider a secret weapon of mine.  It’s tiny, it’s loud, and it sounds great.  I managed to grab it for a steal on Reverb.com not long after they were first released, $200 shipped for the amp and matching cab, you can barely get just the amp for that anymore.  You can see me standing in front of it for scale.  It’s rated at 200watts, I’m pretty sure that’s “peak,” but it can totally keep up with a drummer, just not so much low-end “oomph.”  But it takes pedals amazingly, fits in a backpack, and attracts confused looks.  I love it.  (I’ll do a full review of this amp in a future blog).

The ZT Lunchbox is so flexible that I’ve even played acoustic gigs with it! Yes, they have a seperate ZT Acoustic amp, but I haven’t found that one at a steal of a price yet.  But, the speakers in there are actually full range speakers, aka, PA style speakers.  The preamp does some voodoo to make it sound like an electric guitar amp.  To use this for acoustic gigs, I use a small mixer to create the guitar/vocal mix, then plug it into the Aux In jack, which bypasses the preamp.  It’s more than enough volume for a solo acoustic gig in the corner of a dive bar.  Espcially if you use a speaker stand as a pedelstal to project the sound.

This Peavey Bandit 65 has become a bargain buddy of mine.  I picked it up off of Craigslist for $60.  It was OK, not great, but OK with the stock Scorpion speaker.   I found a deal on a used Eminence Swamp Thang for $70 shipped, and it brought this cheap-o beast to life! It is by far the loudest amp in my arsenal now.   The guitar leaning against it was about $120 for the guitar and mods, and I feel confident gigging with this combination in any size room for a cool $250 total.

Now enter the Bandit 65’s baby brother, the Studio Pro.  I actually just played this at my band’s last gig last week.  This was a $60 Facebook Marketplace find.  It’s tiny, cheap, sounds small, but really poked through the mix.  I actually put the Scorpion from the Bandit 65 above in it.  The Scorpion was brittle on the high end when the Bandit 65 was really cranking, it just didn’t mesh with that amp.  But this Studio Pro is only 20 watts, so it doesn’t seem to be pushing those brittle highs, and the Scorpion is a huge upgrade to the stock Oxford speaker that was in it.  I couldn’t justify having two old Peavey amps where I spent more on the speaker than the amp itself.  But, so far this is the winner for cheapest amp I’ve ever gigged with that wasn’t borrowed or part of a trade. 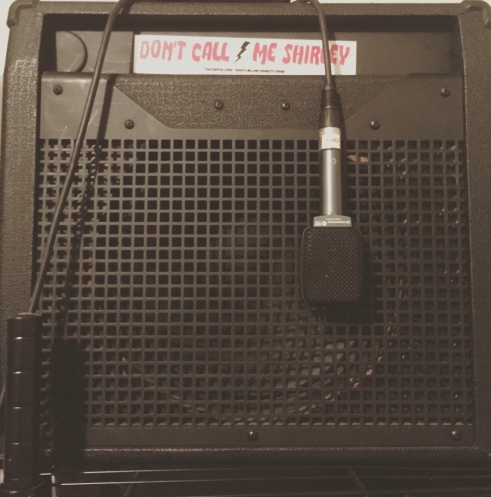 This 1×12 “cab” is a total visual abomination that has graced the stage many times with various heads (I don’t have any pics of it at a gig with a head though…).  I’ve used this cab with a VHT Special 6, Orange Micro Terror, and Bugera G5 on stage.  This was one of those dirt-cheap Raven amps, but the person I bought it from said the amp part bought the farm.  He gutted it, left the empy chassis, and put a 1/4″ speaker jack on the back of the chassis.  I bought it from him for $20 on Craigslist, but the stock Raven speaker that was still in there was just a waste of paper and metal.  I put an old Peavey Scorpion speaker from a teal stripe Bandit that crapped the bed in this “cab.”  While not visually appealing, it sounds great and weighs next to nothing.  It was made complete with my band’s sticker on the front.

Alas, the quest will continue, most likely indenfintely.  Yes, I have some nice tube amps that sound amazing, but was fun is playing it safe?  Bringing a small amp with just a couple knobs, turning em up and seeing what happens is a mild adrenaline rush.  Get out there, experiment, and see what tonal tapestries you can weave!  I have a plan to really turn some heads at my band’s next gig, so stay tuned for that rig!!!

Find deals on the Orange Micro Terror on eBay here!

Find deals on the Vox AC-4 on eBay here!

Find deals on the ZT Lunchbox on eBay here!