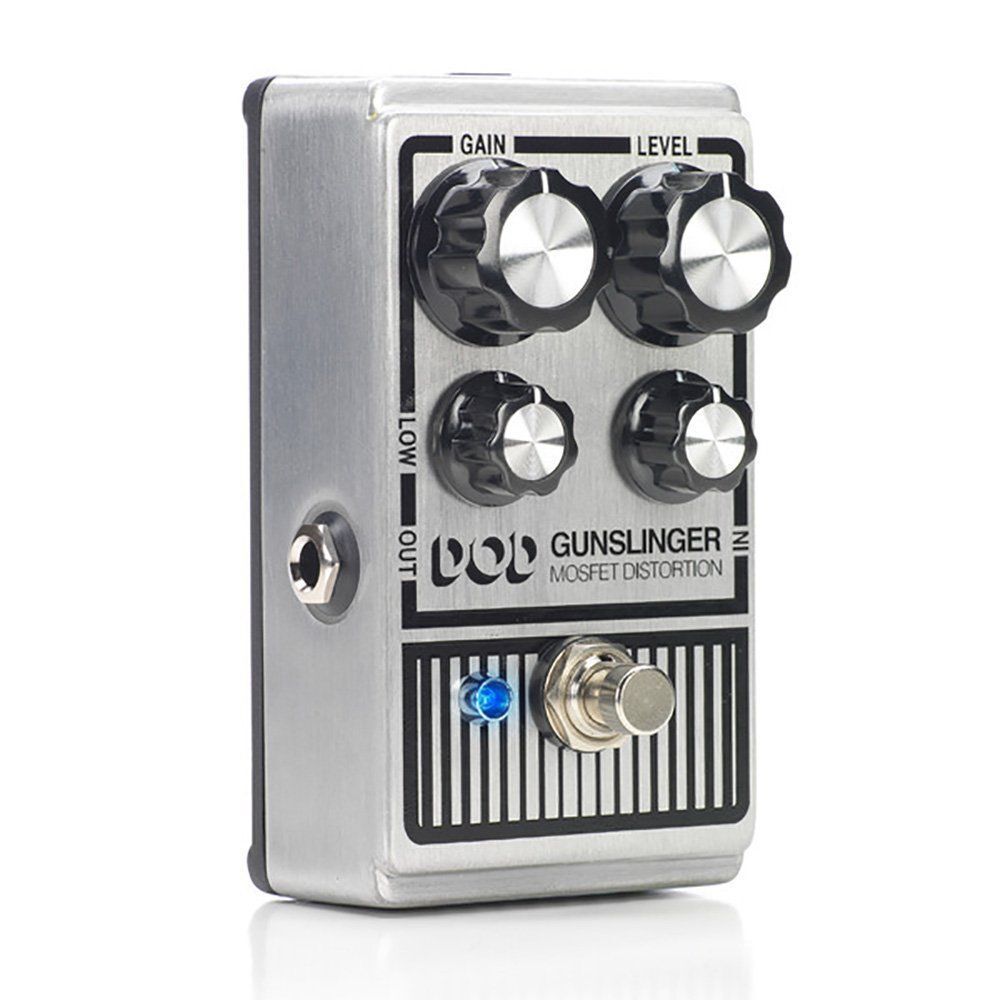 In this gear review, I’ll go over the DOD Gunslinger MOSFET Distortion pedal.   This pedal has actually become my main live tone.  In 2018, for some reason a whole bunch of them were around at a $30 blow out price when they’re normally $99, so I jumped on it.  They can still be found around $50 new in some places, the $30 range used.

Enough About The Specs, Nerd, How Does It Sound?

The range on the gain knob really doesn’t sweep that far.  On minimum, it’s still pretty dirty, but at full gain it’s not overboard.  I’d say full gain is still very useable, depending on the output of your pickups.  They say running it at 12v gives it more headroom and dynamics, but even at 9v it’s still pretty dynamic.  You can roll back the volume on your guitar and it will clean up pretty well.  Even at full gain, it’s still pretty articulate and doesn’t turn into mush.  BUT, to me, it sounds kind of “unhinged.”  By that, I mean it sounds like an amp that’s really pushing its limits and right on the verge of falling apart, but still articulate.  I generally use solid state amps as clean pedal platforms live with no breakup at all from the amps, and it even gives off that vibe through them.

Playing live I’ll generally just leave the pedal on 75% of the time (running into a clean amp) and use my guitar’s volume/tone knobs/pickup selector to get all the tones I need.

The reason this pedal really shines, especially in a live band context, is it does have a very pronounced mid-range to it.  The EQ focus is almost like the final tone you get from boosting an old Marshall with a Tube Screamer.  Not the “tightness” of the gain, but the EQ focus.  Although there’s no mid-EQ control, it’s still very pronounced and will sit in a mix like the final puzzle piece when you do it correctly.  With the 2-band EQ, just like on a lot of vintage Fender amps, to get more mid-range, you lower the low and high controls, to get less mid-range, you increase the low and high controls.  Through most of my amps, the best ratio is with both EQ’s on about 6.  When I run it through an amp, mic it, and it’s coming through the front of house; I can hear everything I play clearly and it doesn’t step over the vocal or bassist frequencies.

The Bad: It Doesn’t Stack Well

This is honestly my only critique of this pedal; it doesn’t stack with other drive pedals well.  I tried it with Tubescreamer clones, Klon Klones, Bluesdrivers, clean boosts, fuzzes, other distortions, etc.,  it just did not stack well.  I tried before and after all the above pedals.  It just resulted in too much mid-range, and too much noise.  I eventually learned that just using it on it’s own with the gain set to the maximum I would ever need then using my guitar’s volume knob for lower gain tones is the best approach for this pedal.

It’s a solidly built pedal, it doesn’t give off the cheap vibe that it’s $30 price tag (at the time) would seem to indicate.  Maybe because it was originally $99.  Even at the $50 price point you see it at now it’s definitely worth it.  With it’s “on-the-verge-of-falling-apart” gain characteristic and mix-friendly EQ focus, it’s like that one reckless friend who can drink everyone under the table, but can clean up enough to invite to a family function.

Find a deal on one at my eBay Affiliate link Here.