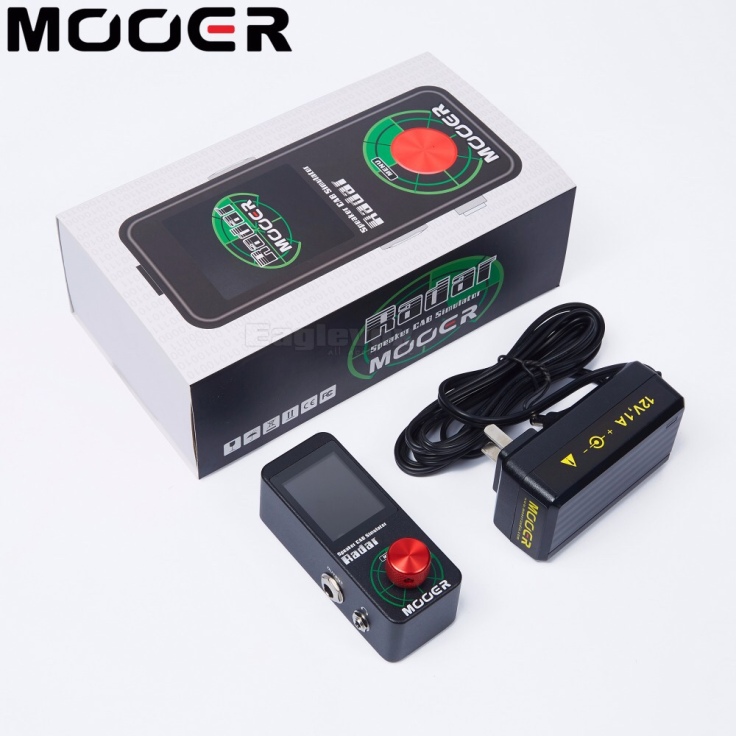 I’ll just start this review by saying this is one of the best pieces of gear I’ve ever bought.  It is safe to say that 95% of my guitar playing since I bought my Mooer Radar has utilized the Mooer Radar.   The world of Impulse Responses (IRs) has been growing drastically in recent years for guitar speaker cabinet simulation.  I’d be willing to bet that you’ve heard IRs on thousands of recordings without even knowing it.

Going into the specifics of what makes IRs sound so good is a topic for another day, and quite frankly one I’m not smart enough to understand yet.  I just know I like what I hear with them.  The problem that kept me from delving into the world of IRs for so long was they were primarily based in DAW plug-ins.  I’m cheap when it comes to computers as well as my gear, so having part of my rig dependent on my subpar laptop just seems like a gigantic hassle to me.  I’ve tried several cheap “cabinet simulation” pedals in the past, and all of them left me wanting more.  When I saw the Radar was IR in a pedal form and would let me use IRs without the hassle of a computer, I just had to have it.

-Micro USB in for use with PC editor software

-Places to save 36 presets

I’ll caveat this with I have yet to use any PC editor or hook it up to my PC.  I like using equipment as standalone unit.   I have seen multiple other demo’s/reviews that indicate installing the latest firmware to V1.2 makes a huge difference.  I bought mine as an open box and luckily it already had the newest V1.2 software installed.  I guess a lot of the factory shipped ones still have the previous version of the firmware.  When you boot up the pedal, it will indicate which firmware is installed, if you get one and it has any firmware previous to V1.2, I would recommend performing the update.

When you boot up, it will go to the last preset you left off on.  However, if you turn off the pedal without saving any changes, it won’t recall unsaved changes.  You can twist the knob right and left, and it will scroll through the presets.  If you do a quick press on the knob, it will access the master volume of the pedal.  Once you set the master volume, press the button and it will go back to the home screen.  Now, to get to the editing and bypass functions, this is where the button is a bit tricky.  To get to the editing menu, you have to hold the button down for 1 second, and then 1 second to return to the home screen.  To bypass the pedal, you have to hold it down for about 3 seconds.

Once you’re in the editing screen, there are three basic sections of this pedal: Power Amp Simulation, Cabinet/Mic Simulation, and EQ.  Once you understand this flow, it’s pretty intuitive.  However, with all of the cabinet and mic options, you can get into option paralysis.  What I did was spend time listening to all of the options, picked which I like best, and don’t think about it again. Otherwise you can spend days going between microphones and whether it should be 5 off axis or 20 off axis.

The 30 built in cabinets seem to cover just about every style of cabinet.  Like I said above, the stock ones sound pretty darn good!  So good that I haven’t even ventured into 3rd party IRs yet.  This is where option paralysis kicks in.  I essentially have two cabinets I switch between: The UK Citrus 4×12, and the AC-15 1×12.  I use the UK Citrus for most modern style tones (think any that would use a 4×12.), and the AC-15 when I’m going for a Vox style tone.  This was mostly just a matter of trying them all and they’re the ones that resonated with me.  If you’ve watched any of my videos that I’ve made over the past several months, it’s been one of these two cabinet IRs.

The magic of having so many cabs to choose from comes in handy once you start recording.  A speaker cabinet can have a drastic effect on the tone, and layer different tones can result in a much bigger, fuller sound.  It’s also fun to mix and match amps with a cabinet you wouldn’t normally associate with that amp.  For example, try running a metal distortion through a Fender Champ cab, or a Vox-style tone through a Diezel 4×12, maybe something cool will happen? Maybe the world will explode?  Who knows? For live performance or just practice situations, I do my best to just find what I like best and leave it so I spend more time actually playing than twisting knobs.

To be honest, I’ve only used the bass cabs once, and that was using a guitar preamp into it, I was just trying to lay down a scratch bass part for a video.  To be honest, it sounded like a bass amp.  So I have no reason to believe those cabinet IRs are any less impressive than the guitar ones.

The 11 mic model simulations built-in to the Radar covers pretty much all the basics.  Changing the microphone also has just about as much of an impact on the tone as the speaker cabinet itself does.  You can use one at a time and adjust the distance from the cabinet edge as well as the distance from the cabinet.  Granted, I’m cheap and have never recorded in an actual studio, so I don’t have first hand experience with most of these microphones for comparison.   I have, however, spent a lot of time with a SM57, and I’d say this nails the EQ coloration of a SM57.   It’s really the sound of a guitar amp I’m most familiar with, so it’s the mic I use 99% of the time in the Radar.

Maybe I’m about to be a little nit-picky here and expecting more out of the pedal than its price-point will allow, but I really wish you could use 2 mic simulations at once.   If I ever do get around to 3rd party IRs, it will be purely for the sake of multiple-mic emulations.  Which, the Radar does make up for this feature with the ability to load 3rd party IRs, so it is by no means a deal breaker.

I’ve tried running the Radar in multiple scenarios, and the EQ section is what allows for such flexibility.  There two different graphic EQs (one for guitar, and one for bass) that have predetermined frequencies that people usually boost or cut for each instrument, but you can change the frequencies.   There’s also the parametric EQ, where you can choose to boost or cut whatever frequencies you wish, as well as the Q for each frequency.

With most setups, I haven’t had to adjust the EQ too much, it’s more for fine tuning.  One more good feature of the EQ section is HP and LP, which are high-pass and low-pass filters.  On pretty much every preset I use, I use the HP to cut out all frequencies below 450hz, which is something I usually do on any mix anyways.  This prevents any muddiness in the sound as well as helps prevent interference with the bass guitar.  I also take the LP filter and turn it all the way up to allow all the upper frequencies through, this stops the sound from getting muddy.  Pretty much, I always have the EQ on.

I have tried plugging all sorts of guitar signals into it, and the Radar somehow manages to create a useable to great tone out of it.  Whether its a preamp, a headphone out, or running pedals directly into it without an amp, great tones come out of the Radar.  Now, this may have more to do with the IR technology than the Radar itself.  What sets the Radar apart from other methods of using IRs is the pedal-based functionality combined with the Power Amp Simulation and EQ.  Right out of the box, once you have the latest firmware update, there are great tones internal to the Radar.  If I ever get around 3rd party IRs, I’ll update this review to capture my experience with it.

Here I am running the headphone out of a Marshall MS-2 into the Radar:

Here I am running the line out from a Marshall Valvestate into the Radar:

Here I am running a Metal Zone directly into the Radar:

(full disclosure, that’s an affiliate link, if you buy one through that link, you help support this blog and it doesn’t cost you an extra penny!)