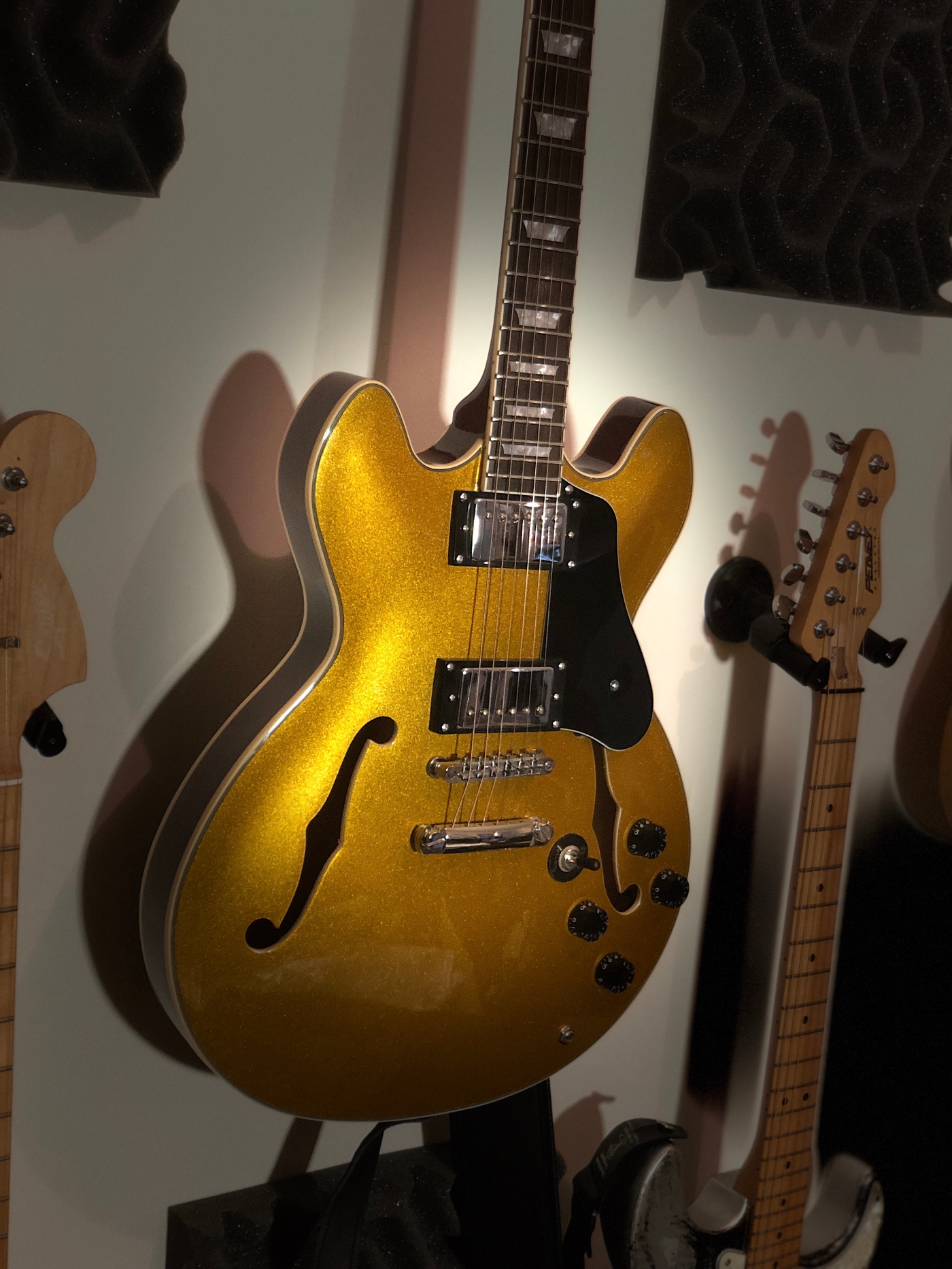 Check here to see if they’re in stock!

Ok, now that I’ve got that out of the way.

I finally decided to see what all the hullabaloo surrounding Firefly guitars is about. All the Facebook posts, message board posts, and videos surrounding these guitars has had me intrigued for a long time. Now, I fancy myself a connoisseur of frugal 6-string fury, but the idea of a $139.91 guitar with consistent praise still seemed to good to be true. These guitars are actually a bit tricky to get your hands on too. They seem to only be sold on Amazon.com, and they are sold out almost immediately when they get a batch in.

I’ve been periodically checking Amazon.com, almost clicking that “add to cart” button when it was in stock. Finally, this past week, in fact it was Tuesday, I was watching videos of them, and I just couldn’t take it anymore. They were in stock, specifically this voluptuous sparkly gold you see above. I had it in my driveway by Thursday (and then asked the Mrs. for forgiveness for buying yet another guitar…).

I made this unboxing video:

I did that video playing it exactly as it came out of the box.  I didn’t adjust intonation, string height, or neck relief, I just tuned it up and went.  My thought with doing the video that way was having a beginner-level guitarist in mind.  I spent years playing guitar before realizing that action was something that I could adjust and customize.  So for most guitarists looking for guitars in this price range, that’s how they’re probably going to experience this guitar.

Now, I’ve been around long enough to know that guitars in this price range aren’t going to come perfectly set-up, but overall it was not bad.   To be nit-picky, the intonation was a bit off, the action was a tad high, and after the video, I realized the truss rod was a bit too tight with no relief in the neck.  But the guitar did come out of the box essentially playable, other than the intonation.  After the video, I got it set up how I like, and it made all of the difference in the world.

With affordable guitars, the playability is what can make or break a deal, especially with set-neck guitars.  A guitar with playability is a guitar that inspires playing.  This guitar is inspiring playing.  I’ve now had it 3 days as of this writing, I keep finding excuses to go play it.  The frets did feel a little rough the first few times I played it, but a few days of bending strings seems to have smoothed it out.  The frets are leveled, there are no dead frets.  The frets are nice and crowned.  I’ll say the fretboard wood does feel a little dry, I’d probably be hitting it with some Ernie Ball fretboard conditioner wipes.

This guitar sounds like a double humbucker, semi-hollow body guitar should.  Maybe a bit on the dark side, but overall, pretty darn good.  I honestly bought this guitar with intentions to gut and upgrade all the electronics and hardware, but after playing it, I think I’m going to keep the electronics as they are.  It’s a nice fat, mellow sound.

To me, the finish is the final consideration, but I must say, it’s a 9/10.   The gold sparkle just shines in the lights.  In the upper bout, there’s a little line in the finish that I can’t even pick up in photos.  That was honestly the only blemish I could find.  The headstock, which is usually something that people find gripes with on cheaper guitar, I think is actually elegant and doesn’t take away from the guitar.

The Only Downside I’ve Found So Far

The tuners.  I wouldn’t expect great tuners on a guitar in this price point.  Heck, I wouldn’t even expect great tuners on any guitars under $500.  But these tuners are just difficult.  It seems that when you’re turning them, you can turn it almost a 1/4 turn before the pitch changes, and when it does, it jumps almost half a step.  It takes a lot of string stretching and bending to get it in tune.  I will most likely be changing these tuners out.  From what I’ve read, 10mm tuners will fit the FF338.

I have to say, this guitar is probably the best bang-for-the-buck I’ve ever gotten on new gear.  In fact, if you’re looking for a semi-hollow guitar in the sub-$800 range, I’d say go for this over Epiphones or Ibanez’s.  Playing it, it doesn’t feel like a cheap guitar.  It feels like a solid player.  Does it feel and sound like a Gibson ES-335?  Not quite, but it costs 1/10th of a ES-335.  If money were no issue, then yeah, go for the Gibson.  If you’re like most people, these cheap guitars are a godsend.

These sell out quick when they appear on Amazon.com.  If you find one in a color you like, jump on it.  You won’t be disappointed.

These are just my initial reactions.  I will do an in-depth review/demo of this guitar once I spend some more time with it.  That’s how I like to do the reviews I write, I want to make sure I haven’t left any stones unturned with the gear.  Be sure to join my emailing list to know when I do!