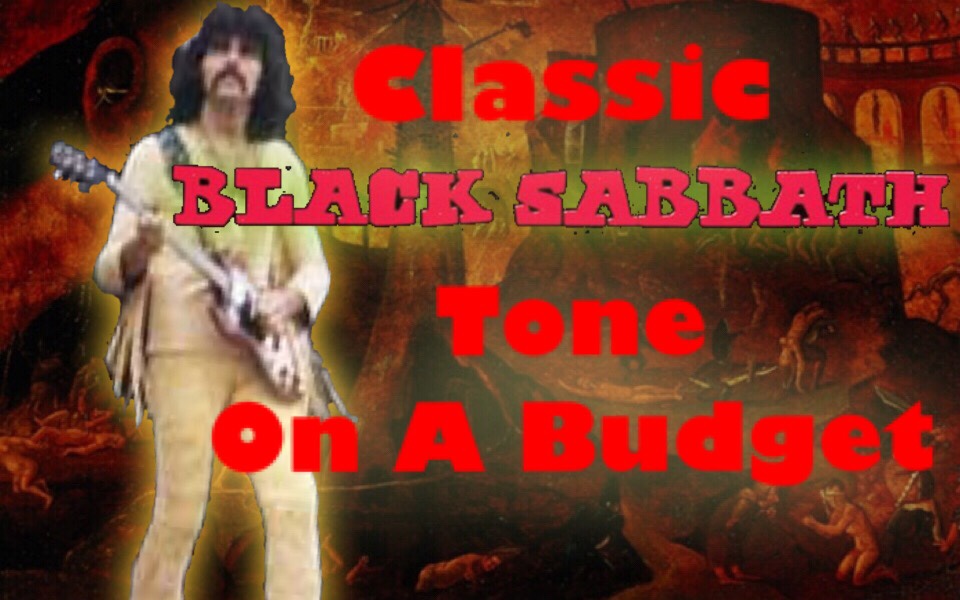 I was actually inspired to attempt this based on a recent video that Reverb.com put out about getting the Black Sabbath tone.  However, they used expensive gear.  My modus operandi is to be a cheapskate, so I thought “how could I get that tone as cheap as possible?” Furthermore, I set out to do this with gear I already have.

I grew up listening to my parents’ copy of “Paranoid” on vinyl on repeat.  Front to back just a great album.  But when you think of “heavy metal,” which many would argue Iommi created the guitar style, his tone on those early albums isn’t exactly what comes to mind with metal tone in a modern context.  The tone really doesn’t take up a bunch of sonic space, but it’s brash and in-your-face.  “Geezer” Butler had a massive yet punchy bass tone, as well as a bombastic playing style, and that’s what really took up most of the sonic-space with Black Sabbath.  If the listener were in a boxing match with Black Sabbath, Geezer handled the blows to the body, and Iommi punched you in the face.

How Tony Iommi Got His Tone

He would slam the front of his Laney amps with the treble booster, which results in a unique harmonic distortion.  His Dallas Rangemaster was modified by a roadie at some point early in their career, but was then tossed out by another roadie some years later who thought it was busted.  No one knows exactly how it was modified.  But with treble boosters, essentially, the amp’s circuit and speakers can’t reproduce all that treble, so it becomes distortion.  The Laney’s were very close to Marshall Plexis, and he’s said he only used Laney because they gave him the amps for free, but luckily they sounded good.  From there he went to the 4×12 cabs that were loaded with some sort of Celestion G12s, not sure exactly which ones.

I’ve seen conflicting stories on which guitar he used to record “Paranoid,” it was either a 3-humbucker SG, or his “monkey” SG with overwound p-90s. The 3-humbucker SG he did use on the first self-titled album because it’s what he could find after coming into the studio for the first time and realizing his strat wasn’t gonna cut it.  However, live he used the monkey SG almost exclusively for a long time.

Combine this with the fact that Iommi had his finger tips chopped off, so he had to create artificial fingertips in order to fret the guitar, he also used super light strings and had a super light touch as a result, and just his musical instincts.  When it comes to the leads, the solos were very frequently double-tracked, resulting in a fatter lead sound.

How To Get This Tone On A Budget

I’ll start with the amp.  I tried this with both an Epiphone Valve Jr, and a Bugera Vintage 5 (as used in the video above).   What they have on common are they’re darker “British-style” tube amps.  Having an amp that’s starting out dark really let’s the treble booster create those harmonics in the range the amp can’t produce.  So start off with a darker British-style tube amp, and set somewhat dirty, just past the point of breakup.  Probably not a chimy Vox-style, and a Fender-style will probably have too much of a scooped mid-range tone.

The pickups in the guitar are also important.  Regular single-coils from a strat or a tele aren’t going to have enough oomph.  P-90s and Humbuckers will get you there, but make sure it’s not a muddy humbucker.  For the video, I used my Squier ’51 partscaster, which has a bright ceramic humbucker.  I have a Les Paul Junior copy with a P90 that also got the sound too, but it needs some work, which is why I didn’t use it for the video.  But just think: bright and hot.

For a treble booster, unfortunately, there are no cheap Dallas Rangemaster clones on the market.  Really, the only cheap treble booster I could find currently on the market is an Electro Harmonix Screaming Bird, but it’s not exactly meant to be the rangemaster. I don’t have that one either, but I’m suspecting it could do the trick. I started with trying a Joyo EQ pedal, just turning the two highest frequencies all the way up, but it still didn’t hit the preamp hard enough. If you have an EQ pedal with a lot of output, it will probably work.

Out of the pedals I currently own, the Mosky Golden Horse is the brightest OD I have, and it’s one of my cheapest pedals.  I turned the treble and output knobs to 10. Then I brought up a smidgen of gain to taste.  And what do you know, it did the trick!  I’m going to make an assumption that pretty much any Klon-style overdrive with a treble knob will get you there.  A tubescreamer style just doesn’t get bright enough, and it rolls off too much of the low end.  You could probably try an overdrive that has a three-band EQ too, just turn that treble all the way up, keep the gain low.  The aim of the game is to slam the preamp of the amp with as much treble as possible.

If you’re recording, mic and mic placement is important.  With the very brash sound Iommi had was from micing pretty much straight onto the cone, not toward the edge of the speaker.  Within the Mooer Radar, the mic that got the closest to my ears was a Sennheiser 441 dynamic mic.  Those mic’s in real life ain’t cheap.  But, a dynamic mic pointed at the center of the speaker should get you good enough for government work.

So to recap:  Bright/Hot sounding Humbucker Or P-90, really bright overdrive slamming the front of a dark sounding british-style tube amp just past the point of breaking up going through a celestion type 12″ speaker will get you 90% of the way there.  If you try this and have success with your own gear, let me know what worked and didn’t work for ya!

(all links above are affiliate links to either Amazon or eBay)