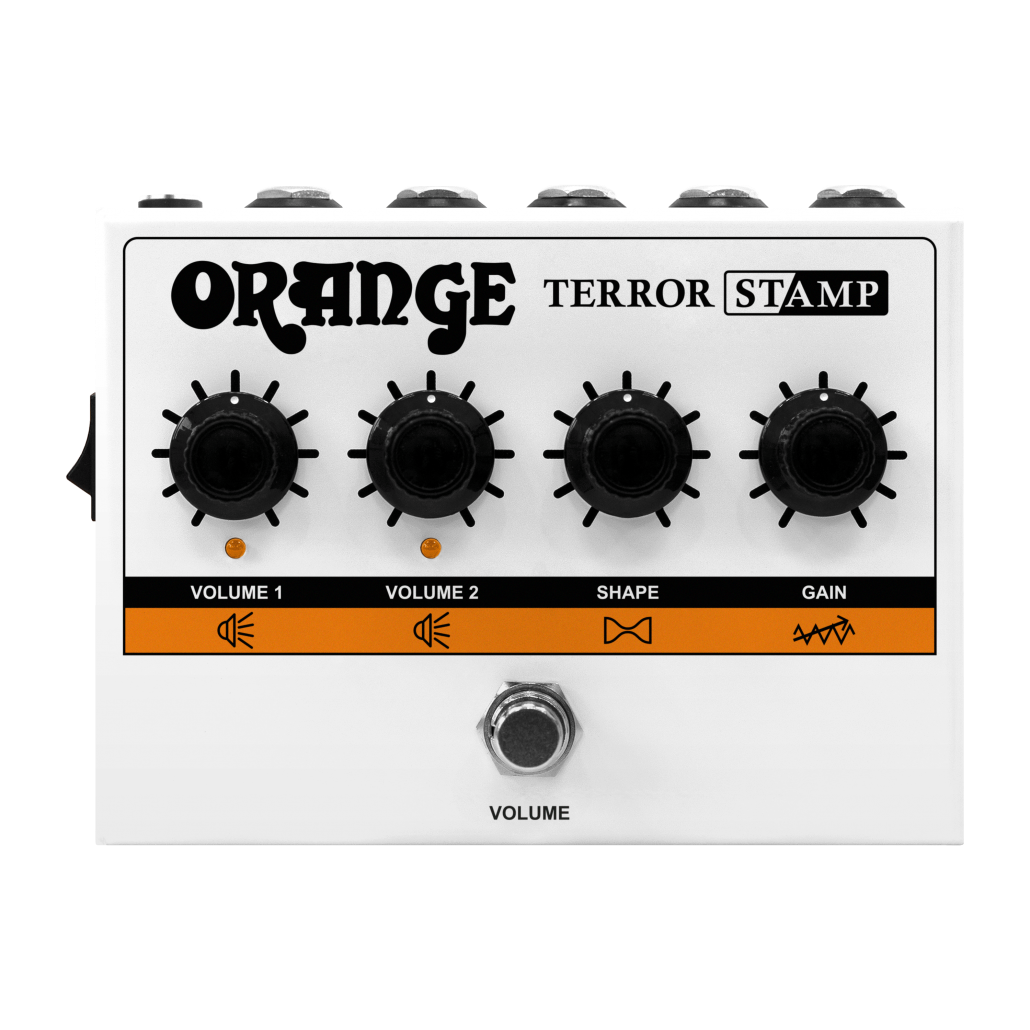 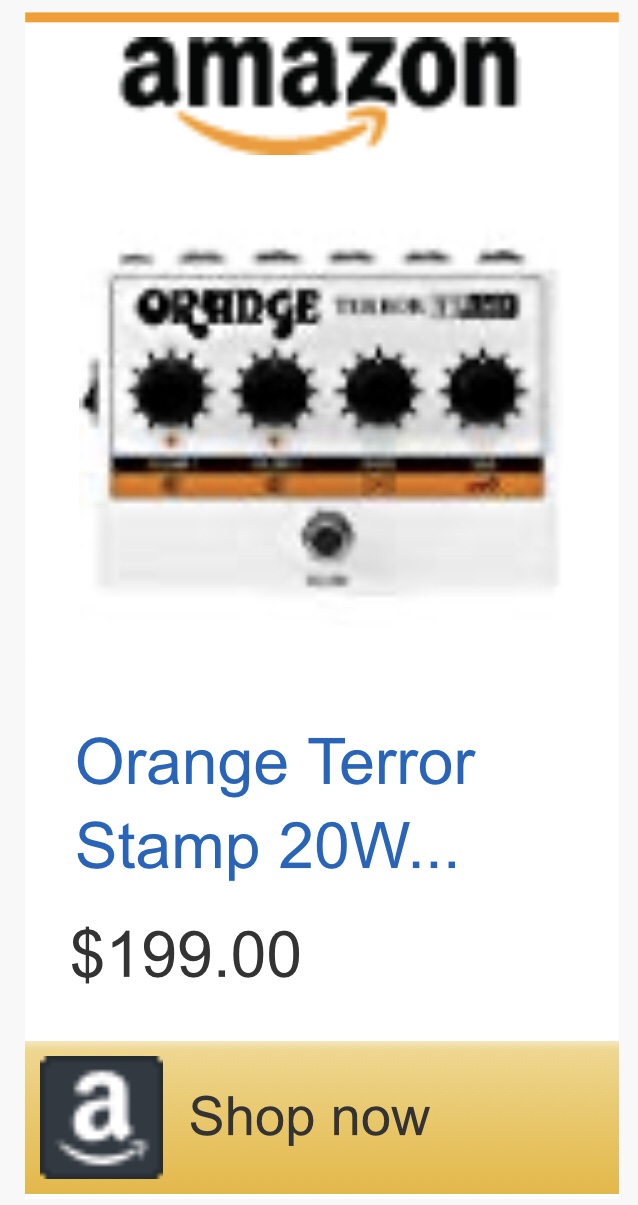 I find the tone knob sounds the best around noon, maybe it’ll need a tweak if I plug it into a dark/brighter speaker cab, or if I use a brighter/darker guitar. But right at noon is super balanced and pleasing. Turning it below 10 o’clock or above 2 o’clock just got into unusable territory. It would have a be a combination of a really weird guitar and speaker cab to need those settings.

I find the gain knob seems to be closer to the original Micro Terror. There is still plenty of gain on tap, but it gets pretty clean once you get the gain knob below 11 o’clock. This was a pleasant surprise because it means you could use this as a “pedal platform.” With the gain knob in the noon-2 o’clock area, you get that Orange crunch that will be right at home for any classic or roots rock. The knob past that gets you to the modern hard rock and metal tones. About 11 o’clock to noon is a very mild crunch, and anything earlier than 10 o’clock is really clean. It should be noted that the lower gain is also quieter overall, so if you want a pristine clean, you really won’t be loud enough to keep up with a drummer.

The gain characteristic is all classic Orange. It’s crunchy, it’s got some bark, and it can get loud and mushy at the highest settings. I know there have been videos comparing the Micro Dark Terror to the Dark Terror, and the all-tube dark terror did have a bit more low end thump to it as well as some additional power tube harmonix as you crank it up. Being that this is based on the Micro Dark Terror, the same kind of comparison applies here. I’m not saying that it’s a bad thing, but it’s just managing expectations with anything with a solid state power amp. The tube is in the preamp section, which does give it half of the tube amp equation, and it will take overdrive pedals well as it will breakup more in a pleasing way. But cranking the volume won’t give you more power amp breakup.

With the power amp being solid state, the response is very immediate, like a solid state amp. This is something that I guarantee 99% of an audience won’t notice, but it affects how the amp responds to you, the player. I’m not saying this is a good or bad thing, I actually kinda like the immediate response of a solid state amp, it gives me a bit more urgency in my playing.

Orange is selling this as a pedalboard based amp, which I see more and more companies coming out with this pedal sized power amps, but this is combined with a good sounding preamp. If you still want to keep this on your cab on the back line, the box comes with rubber feet you can add, but this will defeat the purpose of the footswitchable dual volume, and I would recommend just getting the original Micro Dark Terror for less money if that’s how you’re going to use it. As it comes, it’s a nice flat bottom that is easy to stick Velcro to. 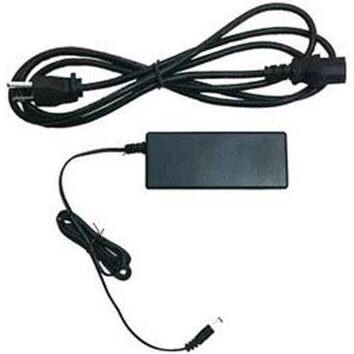 The power supply is a bit cumbersome and you’ll have to work out how to either hide it under your board, or deal with it coming out of your board to whatever wall outlet or extension cord you can find. How I have my board set up (a cheap knockoff of a Pedaltrain) is I have a medium duty extension cord with 2 outlets on it and I have it secured to the underside of my board, one of the plugs for a power brick, the other is now for this amp. Then the rest of the power cord I’ll zip tie to the underside of my board. DO NOT try to use a light duty extension cord, like the one grandpa uses for his Christmas lights, this is an amp, it needs some juice flowing to it and it will melt an extension cord that can’t handle the miliamps. Don’t ask me how I know….

Why Dual Volumes And Not A Clean And Dirty Channel?

Believe it or not, this is the feature that made me say “holy cow, I need this amp in my life!!” For the gigs I play, it’s on me to boost my solos up to the appropriate level to take front and center stage. That’s why I play gigs after all, to show off and make sure everyone can hear me. But I also know when I’m not soloing, my rhythm tone needs to sit back in the mix. Because of this, I’ve used a post-gain boost to lift my entire signal up to about the volume of the lead vocals. I’ve resorted to all my gain stages being pedal based and running into the front of a clean amp because to use amp distortion and achieve this same effect, I would have to get 2 additional cables involved to run the boost in the effects loop. I’m too lazy to do that at gigs, and it provides two more potential points of failure.

So how does this tie into the Stamp? I can have the same tone, but just louder when I need a solo boost, but with the ease of everything being contained in pedalboard. Instead of 50,000 cables on the stage, my rig will now only have the extension cord providing power to my board, and a speaker cable running to the speaker cab behind me, that’s it. Everything, including the effects loop, will be contained to my pedalboard. Plus it will let me eliminate the need for the boost pedal, and a low gain pedal. I generally don’t do pristine cleans, so I plan to set the amp up with a good crunch around noon-1 o’clock on the gain knob, hit it with an overdrive for higher gain, or roll the guitar’s volume back for clean.

The Million Dollar Question: Is It Loud Enough To Gig With?

The diplomatic answer is: it depends.

There are several factors that come into play: the efficiency of your speaker, how clean you want your tone, and whether or not the rest of your band is on board with low stage volume.

The speaker efficiency makes a huge difference in how loud an amp actually winds up being. I know Eminence has speakers that get up to 102-103 for speaker sensitivity ratings, these speakers will definitely give you enough volume for gigging. If you’re using a bottom-of-the-line speaker cab, most likely the sensitivity rating of the speaker will be 96-98 for the sensitivity, these will struggle to keep up with a drummer. In reality, one of these going through an efficient speaker will be about as loud as a 15 watt tube amp through an inefficient stock speaker.

The lower you turn the gain, the quieter this amp gets. If you want a pristine clean, this will drop the volume down enough to struggle to keep up with a drummer. Once you get to about 11 o’clock on the gain dial, which is a very low crunch/edge of breakup type sound, the volume doesn’t increase anymore once the gain gets higher. This is because the preamp is out of clean headroom so it just breaks up instead of getting louder. If you want cleaner, you could experiment with a 12AY7 preamp tube.

If the rest of your band insists on sonic fisticuffs and won’t part with their 100 watt all-tube full stack and a 8×10 bass cab rumbling the whole building, this little head won’t keep up with that. It’s no secret that more and more venues love low stage volume with everything mic’d or DI’d through the PA. Or, if you’re like me, just playing the corner of a dive bar for a couple dozen people on a good night, this has all the oomph the bar owner and bar tenders who have to take drink orders would like.

The Effects Loop: Not Just For Effects

The fact it has a series effects loop opens up a couple extra ways to set up this amp. If you have a bigger amp that you’re not too fond of the preamp on, you can have the effects send go through your reverb/delay pedals, but instead of returning back to the Stamp, send it to the effects return of the bigger amp. It should be the same essential tone, but louder. I have a couple Peavey Bandits that will fill this need perfectly. This is especially handy if you’re playing a gig where you’re sharing amps with other bands and you have no idea what to expect. This will allow you to have your same core tone no matter what amp they have. What’s great is the dual volumes are before the effects loop, so you’ll still have the lead boost through the bigger amp too.

Or, if you have a preamp pedal you like, bypass the whole preamp and just use the stamp as a pedalboard power amp by running it into the effects return. Granted, there are cheaper options for this on the market, but it’s still an option.

I’d rate this as just ok. It’s not the worst headphone out I’ve heard, but it definitely lacks clarity and definition. I wouldn’t show up to a studio and expect to go direct with it, and it may pass if you show up to a gig and find out it’s a silent stage and you need a DI sound, but it wouldn’t be my first choice. Maybe it’s because I’ve spent so long using Impulse Response pedals (Mooer Radar and Digitech CabDRYvr) and this just does not compare to those. If you just want to occasionally practice at home without disturbing anyone, it’ll do. It is a 1/4″ headphone jack, so you’ll need one of those 1/8″ to 1/4″ headphone adapters that everyone loses. Also, if you have this on your pedalboard, you’ll probably need a headphone extension cable if you’re standing up, most earbud cables are pretty short.

This is a great amp for practicing, jamming with friends, and even weekend warrior gigging. Orange pretty much created the micro hybrid head market with the original Micro Terror, and they continue to lead the innovation with the Terror Stamp.